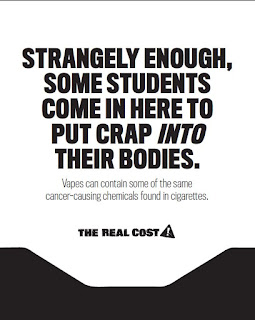 Within the new FDA campaign to "warn kids about the dangers of e-cigarette use", there is a provision to place posters in at least 10,000 high school bathrooms.
I asked Kathy Crosby to give me more details about those “snarky and irreverent” posters with messages such as “Strangely enough, some kids come here to put crap into their bodies”. She told me:

"While we didn't test every single execution of our new advertising campaign, we conducted two rounds of qualitative research with teens at-risk for, or already experimenting, with e-cigarettes.  During this research, it was evident that youth did not believe there was any harm to vaping.  The teens also repeatedly mentioned the frequency of use in schools and in particular, school bathrooms.  We tested different scientifically accurate health consequence messages and tones, some that were irreverent and snarky.

The Real Cost posters you’re referring to use the facts that tested well with youth. Based on this research and our four plus years of experience with "The Real Cost," where we’ve talked with thousands of teens via qualitative and quantitative studies, we feel these messages will be effective as part of the larger vaping prevention campaign effort which is hyper-targeted to teens where they spend their time, both online and in school.

We are proactively distributing the posters over the next month through both a paid media vendor and a partnership with Students Against Destructive Decisions, or S.A.D.D. After that distribution is complete, we will make unbranded posters available on the Center’s Exchange Lab for schools and public health organizations to download and provide to their local youth organizations for distribution. We will also work with the media vendor to determine the best ways to monitor and conduct research on how the bathroom ads are being received by the schools and students.

Importantly, teens are not shy about talking with FDA regarding The Real Cost ads. In just one week, we’ve had over 500 social media conversations with teens who are asking questions about the health consequences, nicotine addiction and how harmful vaping is compared with smoking.

I hope this addresses your question. I read the article you shared and our messaging is very different from the posters featured in the article, primarily because they are scientifically accurate and based on insights with teens at-risk for vaping. I included an example, as requested. Thanks again for reaching out."

When I asked Kathy if there would be any illustrations on the posters she replied there would not be any. All would be on the model attached. She also said:
"The posters are 18x24 and will need to be secured with tape, I believe."

I had asked because I wondered and I am still wondering about the possibility that they are going to be easily ripped off or defaced. I am curious to see how they'll be received. I think I would have pretested this in real high school's bathrooms before deciding to go ahead. I also would have tried to get some direct input from the students themselves about the whole idea, including the content and eventual images.  Why? From previous experiences, I don't put much trust in advertising agencies and having students involved would have made sense (for me). We'll see. I still would like to engage high school students and older youth about how to communicate pro/against vaping, like I did with Cornish School of the Arts students about paid leave for temporary workers. Don't hesitate to contact me: philippeboucher2 at gmail.com
Thank you in advance.

Posted by philippeboucher at 6:35 PM