An article in GQ UK about Juul 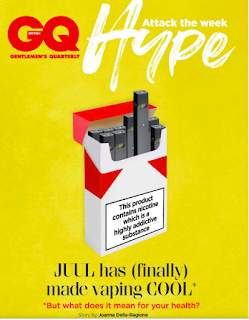 Joanna Della Ragione is seriously addicted to Juul. In her article, she describes her addiction and explains she is concerned for teens in the UK although her examples appear restricted to kids from wealthy families. She says so herself:
With the Juul retailing in the UK at £29.99 and a packet of four pods for £9.99, it’s a cheaper habit than cigarettes but still pricey. Thus it’s the affluent public schools of this country, where kids have access to disposable income, that are proving prime breeding ground for a new generation of Juul-ripping youths.
She does report there are differences of opinion (see below) but her article is essentially a fear story.
Academics are split into two camps: 1) those who believe that vapes are viable nicotine therapy treatment akin to nicotine patches and can ultimately have positive impact on the lives of smokers and 2) those who believe that products such as Juul is creating a new generation of nicotine-addicted youths who would never have smoked. Although both camps concur that e-cigarettes are “less harmful” than their combustible counterparts, opinion is polarised to what extent.

Also this article in The Sun that links at the end to the shocking videos produced by the FDA for their "the real cost" campaign. For a different approach see the excellent 2017 video "What's wrong with E-cigarettes". A more neutral article in Metro.

Posted by philippeboucher at 6:04 PM